Parking was not a problem in High West Jesmond in 1950. 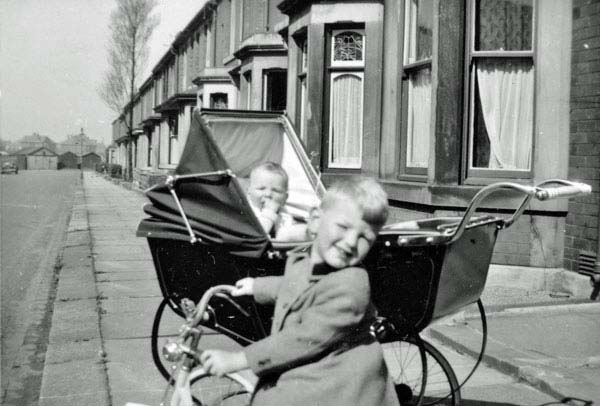 Visting High West Jesmond this weekend I couldn’t help noticing how difficult it is to park. Not like when this picture was taken in early spring 1950 in Kingswood Avenue.

One poplar tree, the last remaining in the road from the time when the estate was laid out with each house supposed to have 2 trees!

One parked car, probably outside the bottom house of Charles Nichol, photographer.

In those days there may have been only 4 or 5 cars in the entire road, but we were troubled by learner drivers practising 3 point turns outside.

In those days, certainly until at least the late 1960s, many of the cars weren’t left on the street overnight. Those lock up garages (shown in the distance in the photograph) housed Jesmond Farm Dairies milk delivery vans and some cars.

Several houses in Kingswood were using backyards to park cars – many of those spaces now used for house extensions.

Jones’ Garage, now North Jesmond Garage, must have kept at least a dozen cars tightly squeezed in each night. In 1967 I paid 10/- (50p) a week to park my Morris Minor in there. That would probably equate to about £10 a week today.