Little Dene, aka Blackies Valley, or what was left of it before they finally filled it in, around 1962 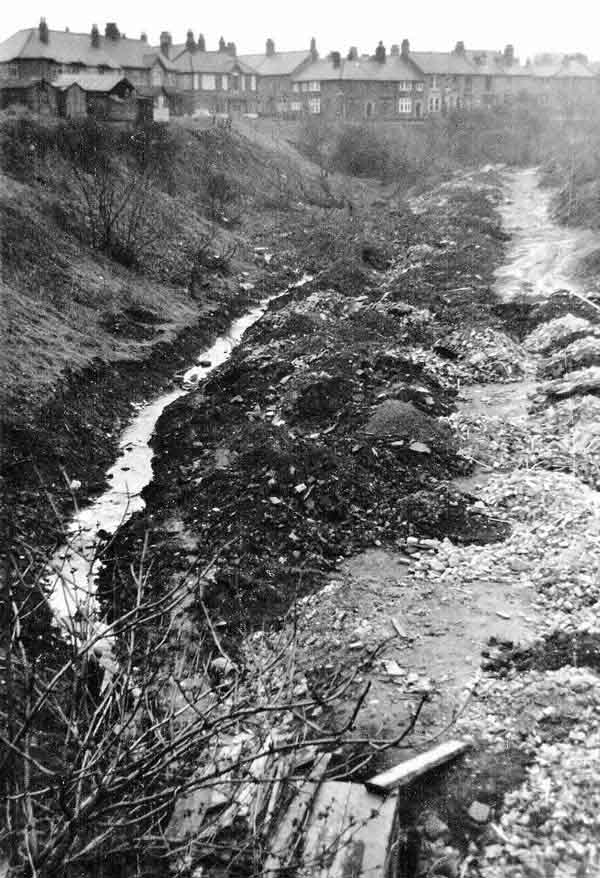 This small stream flows east from high on the Newcastle Town Moor near Kenton Bar, and formed the boundary between the City and County of Newcastle upon Tyne and Gosforth, which was then in Northumberland. Ultimately it joins the Ouse Burn just beyond the foot of Matthew Bank where it is known as Craghall Dene.

It flowed below the Great North Road roughly where Moor Road now joins Moorfield, that point being known as Little Bridge. By the time the large house Little Dene was built on Lodore Road the stream was in a culvert, probably beside the south side of Moor Road. It emerged to the north-east side of the old house through an ornamental angelic water feature in the garden, then flowed at the north side of Lodore Road until the bottom of Newlands Road.

An open culvert (no gating of any kind to prevent entry) then took the stream to the bottom of Mathew Bank. Braver boys than I said they’d worked their way all the way through! The wooden structure at the base of this picture is immediately above that entry.

The Blyth and Tyne railway was built on an embankment across the dene, but that small culvert was extended when material from the clearance of the Forth goods depot was used to broaden the embankment, sufficiently for the building of houses on Ilford Road and Newlands Avenue – and possibly parts of Lodore road itself. The Craghall Dene side of the railway has also been filled at various dates almost up to Matthew Bank.

This picture was taken from the bottom of Newlands Avenue, looking towards Lodore Road and the bottom of Albemarle Avenue. By this time the trees, mostly willow, had been cleared off and the line of the new culvert had been excavated. I think the rubble subsequently used to fill this area came from demolished slum housing in Shieldfield, where tower blocks were built. This site is now a gently sloping grassy area.

Before this it had been a more natural dene, with willow trees, and some sloping allotments on the Gosforth northern side. The south side next to Lodore Road was steeper, comprising building rubble that must have been dumped to make the High West Jesmond site more level when Lodore Road was formed.

Note the line of wooden garages on Lodore Road. These could be hired, 2 or 3 storing small Ford vans for the delivery of milk by Jesmond Farm Dairies on Newlands Avenue (where the convenience store is now). Others were used by local residents. In 1962 very few cars were kept overnight on the roads.

North Jesmond Garge on Lodore Road, just to the left of this picture, was then Jones Garage with 3 petrol pumps – hand operated. At night it also stored residents cars. In 1968 I paid 10/- a week to keep my 1952 Morris Minor there.

Incidentally, North Jesmond originally referred to the part further to the east of the railway, towards Matthew Bank – the garage should really be called High West Jesmond Garage!