When Ilford Road Metro station wasn’t on any agenda, and before the old electric trains were scrapped to be replaced by diesel multiple units 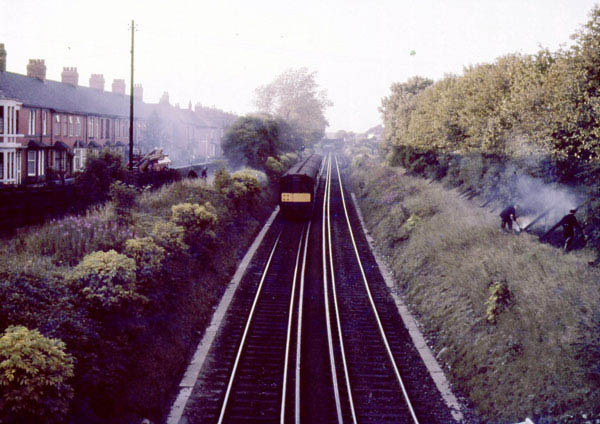 This picture is taken from the overbridge on Moorfield and shows the embankment on both sides of the line had been set alight by sparks from a steam hauled freight train that had passed earlier that spring evening.

This is now the position of the Ilford Road Metro station. A 4 coach Tyneside commuter multiple unit electric has just passed and is roughly where Metro platforms now stand. These trains used to run in 2, 4, 6 or 8 coach sets. At busy summer weekends a special pram coach was often added to 6 coach trains to help get young families to the coast. The pram coaches were older coaches retained from the previous style stock, similar to those used on the South Tyne line to South Shields.

Not too long after this photo was taken it was decided not to replace these old LNER electric units and to replace them with DMUs. They were not to operate as frequent a service, and were noisier. Usage dropped sharply. Amazingly, the finance was assembled to build the Metro system. This part of the track retained the old wooden sleepers, still showing traces of where the third rail had been supported, until the track was relaid with concrete sleepers in August 2013.

This part of Newcastle is called High West Jesmond. Due to it’s proximity to Gosforth fire engines were despatched from both the Northumberland fire station at Gosforth and Newcastle Central fire station. Usually the Gosforth brigade would have the fire out before the Newcastle engine arrived. On this day there was enough work for both!

The Northumberland crew are working in heavy helmets. The Newcastle crew are bare headed.