Dad had a contact at Newcastle Breweries stables where the dray horses were kept, but this small load of manure probably came from somewhere else. 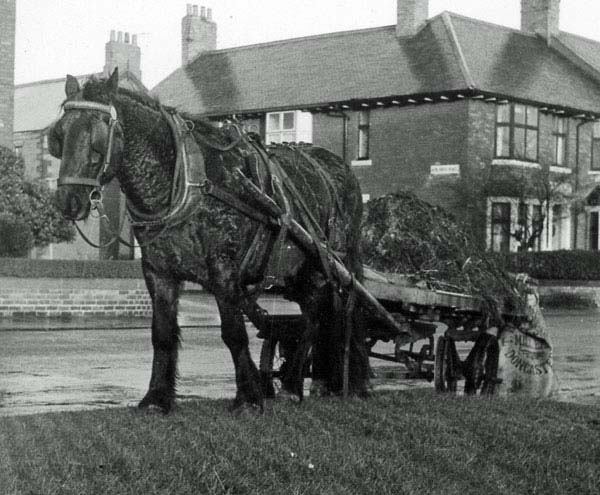 Excellent stuff for improving the allotment!

Taken at top of Newlands Road on Moorfield just as the rain stopped and we prepared to unload into wheel barrows.

In the 1950 and 1960s there were still horse drawn carts around High West Jesmond.

There was a fruit and vegetable man who went up and down the back lanes.

There were rag and bone men who’d do the same crying out “Any old rags or bones or lumber” – although you’d be hard pressed to make out what exactly they were saying!

There was even a coal cart in the 1950s loading coal from the yard at West Jesmond station.

And there were dray horses who brought manure from Scottish & Newcastle’s stables. They were usually larger carts than this one, with two horses.

The house on the corner was occupied by the Brocker family. Mrs Brocker was the first head teacher at Kenton Comprehensive’s girls section.