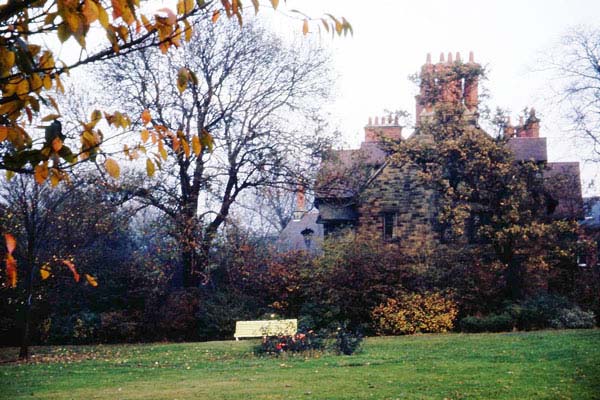 The largest property in High West Jesmond by a very substantial margin was Little Dene. Named after the small dene that ran from the Little Bridge on the A1, also known as Craghall Dene nearer it’s confluence with the Ouseburn at the top of Jesmond Dene.

The stream, the Craghall Burn, formed the boundary between the city and county of Newcastle upon Tyne and the county of Northumberland. It joins the Ouse Burn at the bottom of Matthew Bank. The greater part was filled in by spoil from the construction of the railway yards in the Manors area, allowing the railway to run on the level between Jesmond Dene Road and South Gosforth. The High West Jesmond and North Jesmond estates were partially built on this land.

The stream used to run at the bottom of the Little park, beside Moor Road South, at the end of Moorfield until it was reclaimed from moorland in time for the Coronation in 1953. The stream by then had been culvetted from the west side of the Great North Road, emerging in the garden of Little Dene.

By 1964 Little Dene was badly run down, occupied by an old witch – or so we kids were led to believe! In 1950 it was still occupied by the son of it’s builder, bachelor Alexander Pringle, a brother and a spinster sister. In the 1920’s and 1930’s it had been a very smart house, painted white each year and known locally as the White House. Garden parties were held in aid of charities.

By the 1950’s the garden was badly overgrown, the covered stream emerging from beneath the house into an angelic fountain feature that was almost hidden from view – except to small boys trespassing!

Sadly, renovation seemed to be out of the question and demolition soon followed this picture being taken. By 1970 the site had been redeveloped into Little Dene flats.

This autumn picture illustates how well hidden such a large house was, even at that time of year.

“Alexander Pringle of Cranmer Dykes, Gateshead built St George’s Church in Gateshead; the Rutherford Memorial College, Bath Lane; King Edward School of Art and the School of Bacteriology at Armstrong College; the Commercial Union Insurance Building in Pilgrim Street; Collingwood Buildings in Collingwood Street and Tilley’s Rooms and the YMCA in Blackett Street as well as the Gateshead Cenotaph in Shipcote. Alexander Pringle was also responsible for the reconstruction of The Palace Theatre and the Empire Palace Theatre (Empire Theatre) in Newgate Street.

Further information has confirmed that Alexander Pringle was the builder of the RVI (Royal Victoria Infirmary) which opened in 1901. His name is on the original entrance hall of the hospital. Other buildings included a police station, co-operative stores, breweries and schools. He also built Little Dene in Gosforth where he lived with his family.”

Not completely right. The house itself was in Newcastle, although the garden was partially in Gosforth.

The park in the foreground had been part of the Little Moor when my mother used to play in the rough ground beside it’s northern stone wall. At that time Moorfield did not run out onto the Great North Road, stopping at it’s junction with Lodore Road. I recall the park being laid out in time for the Coronation in 1953, when it was known as the Little Park.