It’s the little details you forget! 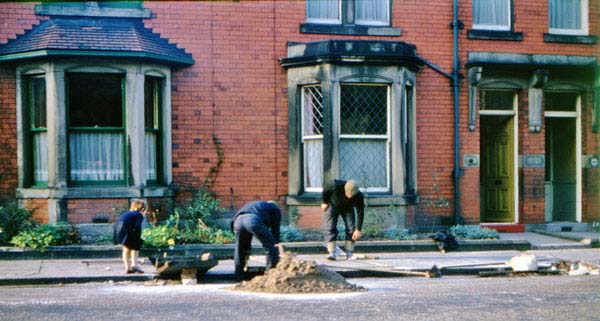 Those wires leading up the walls – radio aerials. Telephone wires were at the back of these properties. Many had overhead wires for Redifusion, a forerunner of today’s cable services.

The polished brass door bell on the house to the right. And all those milk bottles. In those days there were 3 separate milk delivery companies vying for business in this street – Co-op Creameries, Jesmond Farm Dairies and Peter Knox.

Early mornings were quite noisy with all those deliveries of clinking bottles. (Newspapers were delivered from 2 different newsagents and virtually every house had a paper each morning, and most an evening paper as well.)

The leaded windows – and that yellow front door that was quite prominent amongst the mostly green doors of the time.

Not only were the doors usually green but so were the window frames and the door surrounds, as was the house on the left.

The heavy front doors usually left open all day, with an inner porch door that probably wasn’t locked either!

Although all the terraces in Newcastle looked much the same, in truth they weren’t.

Built to a basic standard laid down by the original landowners, these properties in High West Jesmond were built in twos, effectively as a line of linked semis.

The house to the left has a pitched red tiled roof over the bay window, the next has a flat, leaded, roof. The deeds stipulated the type of bricks, stone, and slate to be used on the roof. They even said the mortar had to be black.

The repointing round the yellow door way shows that by the 1960’s such conditions were being overlooked.