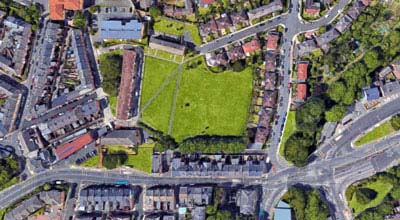 We have just heard that Newcastle City Council has issued plans to build on South Gosforth Green, shown in the photograph above.

One of our East Gosforth ward councillors Cllr Henry Gallagher has asked people to take an interest and even sign the petition against this development.

Henry has told us via our Facebook page that events will be organised in due course and that he is working with the South Gosforth Residents Association on this.

High West Jesmond Residents’ Association is opposed to building on green open spaces used by the community when other more suitable sites are available.  The South Gosforth Green is well used by local residents – much like The Valley and Little Dene in High West Jesmond.  Neither site should see any land lost to buildings.

The following information has been published on the Save South Gosforth Green page on the Newcastle upon Tyne Liberal Democrats website:

Third of South Gosforth Green to be built on

“South Gosforth Green is well known to locals as a quiet oasis next to the noise of Haddrick’s Mill.

Newcastle City Council has released plans to build bungalows on about a third of the Green.

Whilst we support the Council’s aim to build housing specifically to aid those touched with autism we believe there are better nearby places available. Most notably the former Jesmond Dene Nursery site which the council is planning to sell off for millions of pounds. Like South Gosforth Green the nursery is set-off from the main road. Unlike the Green the Nursery gives access to the superb Jesmond Dene which would be of great benefit to the residents.

6 bungalows set in a tranquil green setting would be ideal for this type of accommodation.

So we call on the City Council to abandon plans to build on South Gosforth Green and to look instead at other sites in the area.”