A year of mixed emotions! Spring and summer were relative highs created by the wildflower germination and displays, but this was doused rather by the news that the City Council harbours ambitions to build housing on the eastern half of the Valley.

Because of the need to avoid damage to the emerging spring bulbs, the spring-clean of the Valley & Little Dene was moved forward to early January.

A shortage of time prevented flyers but there were enough pairs of hands to fill 10 large bin bags.

The proposal by Newcastle City Council to reduce the area of cut grass and extend the natural fringe got off to a bad start – the machines trimmed 1m more off rather than 1m less!

However, this hiccup was sorted and culminated in the City placing 12 x 2m poles around the edge of the Valley to guide the grass-cutters.
This provoked public consternation & conjecture! Were the poles for projected flood levels or future building lines? True words spoken in jest??

Wildflower planting and insect hotels – May 2013 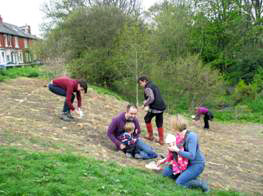 A kilo of “annual cornfield mixture” donated by the City’s Ecology Officer was scattered on the north facing bank of the Valley next to the Dene.

Prior to seed sowing, the land had been cleared of perennial weeds.
The seed sowing and insect hotel building was publicised as part of the Jesmond Festival. 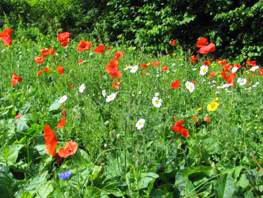 Although “take up” by parents & children was a bit disappointing, those that did attend, 13 in all, did a great job. The wildflowers took 5-6 weeks to grow & bloom but were worth the wait!

Some 300-400 more daffodils planted in the north east (Newlands Road end) and north west corners, increasing the total bulbs planted over the last 5 years to around 4,000!

Although there were no formal organised events on the Valley in 2013, casual use by individuals, families & groups was, as always, extensive.

The most popular times are in summer, particularly warm dry spells, when residents are seen sunbathing, snoozing, relaxing or reading; groups of young people will be playing various games or chatting; families may be having a BBQ.

Throughout the year, there is a constant flow of dog walkers. In fact, the dog walking fraternity are suggesting that the Valley is now more popular than the Little Moor!

There is no doubt that the trees & shrubs surrounding the Valley, a mixture of ash, grey poplar, willow, conifers, horse chestnuts, mountain ash, field maple, sycamore, and hazel with buddleia, hawthorn, blackthorn, elderflower, lilac, wild rose and other shrubs included, now make a very attractive backdrop to the open space.

There has been no evidence during 2013 of “ash-dieback”. There are a significant number of mature ash trees and if these trees do become diseased, a plan for replacements will be needed. We did lose one mature ash in the north west corner – it was removed in order to improve sunlight reaching the adjoining Rectory Road garden.

The environment within the Little Dene continues to improve in terms of its wildlife habitat. The holly and hawthorn whips that were planted 4 years ago are now substantial plants, which, with the help of nettles, render access to the Dene by humans very difficult during the May- November period. However, much better for wildlife!

Not too much to report! The wildflowers attracted a lot of bees – perhaps from the colonies on Rectory Road allotments.

A vixen was spotted carrying 4 cubs (one at a time!) along the northern edge of the Valley and after discussing the grey squirrels in a Rectory Road garden, that may be taking advantage of the hazel trees in the Little Dene, we decided not to recommend a cull.

We have resisted suggestions to reduce or remove the ivy from the trees at the western end of Little Dene, on the grounds that the ivy provides an excellent habitat for birds and insects.

Unknown to residents, during 2013 the City Council had prepared lists of “potential” housing sites to support the need for more land for housing that is identified in the draft Joint Newcastle-Gateshead 10-15 year One Core Strategy. The Newlands Road half of the Valley was included as a potential site in the 2018-23 period.

This was a “bit of a bombshell”!

An open meeting arranged for residents by the High West Jesmond Residents’ Association, unanimously concluded that the Valley as a whole was integral to our community.

As a consequence, it was agreed to investigate, and if possible, proceed with an application for Village Green status.

Village Green Status
We will pursue this with some vigour. If legal difficulties prevent such an application, then applying for “local green space” status will be the next option.

More wildflowers
We plan to extend the wildflower area along Lodore Road and try and introduce an area on Newlands Road frontage. To commemorate WW1, the seed mixes will include poppies.

Habitat and Wildlife surveys
We need to carry out a plant survey in the Little Dene and bird surveys in both the Dene and the surrounds to the Valley.

Committee of Friends of the Valley and Little Dene
December 2013