The council are still planning to impose communal bins on the residents of High West Jesmond.

95% say NO to communal bins in poll

This is despite a recent poll conducted by our local councillors which indicated 95% OPPOSITION to the council’s plan.

Meeting to be attended by Catherine McKinnell MP – Mon 18 Sept

High West Jesmond Residents’ Association has arranged a public meeting, to be held on Monday 18 September at 19:00 at the Trinity Church on Gosforth High Street to discuss this matter. The meeting will be attended by our local MP for Newcastle upon Tyne North, Catherine McKinnell MP.

Prior to her re-election as our MP Catherine sent a message to local residents as follows:

“I know that the proposed roll-out of communal bins by the City Council is causing a good deal of concern amongst many High West Jesmond residents – and that’s why I have sought to represent these concerns to the Chief Executive, the relevant Cabinet Member and officers both formally in writing, and in meetings.

I am particularly keen to ensure that local residents are properly consulted before any such changes are introduced, and that the outcome of this consultation is taken into account when any final decisions are taken on this issue.

I do not want to see such changes simply imposed on local residents, and will therefore continue to press the City Council for meaningful consultation on this issue.”

The meeting on 18th September will be your opportunity to discuss directly with Catherine your thoughts and concerns about the council’s proposed actions.

At the meeting there will also be an update on the latest position regarding plans for the Blue House Roundabout, as well as the Associations’ Annual General Meeting and election of officers for 2017/18.

Nominations are welcomed for officers and committee members and should be sent to Fiona Bruce before Monday 11th September 2017.

We would be delighted to see as many local residents as possible attending this meeting. We anticipate the meeting lasting approximately 90 minutes.

Read more about the council’s proposal for communal bins and see some photographs from newcastle streets where communal bins have been introduced on our Communal bins page. 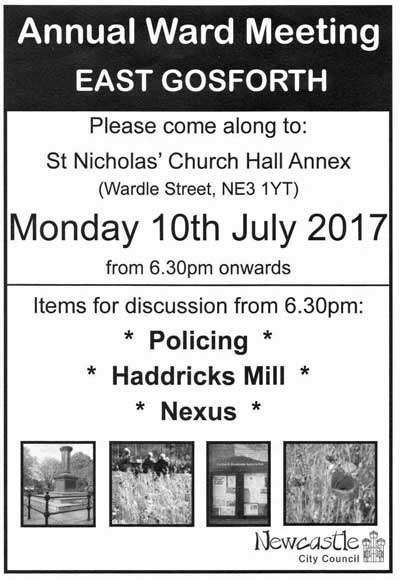 A single meeting to consult with residents

Items for discussion are to include:

The following information has been issued by Newcastle City Council:

There was a large attendance at last evening’s meeting of High West Jesmond Residents’ Association, this included two members of the City Council and a number of non-members who live outside High West Jesmond.

All were eager to hear the latest news and updates. The Chairman, Nick Moore dealt in detail with matters relating to the Blue House Roundabout, Communal Bins, about which Councillor Dominic Raymont reported the latest from the City Council, and the recent incident involving the chopping down of trees without consultation.

There were many questions asked and answered in the lively discussion which took pace.

“Thanks to everybody who came along – it was really useful to get your feedback on the various issues as this helps guide us in how to take things forward.”

Grateful thanks were expressed to the Chairman for the time he has devoted to the HWJRA.

Are you receiving our emails?

Some email addresses we have are incorrect so please contact us if you are not receiving our emails. Anyone wishing to join should please do the same. Please contact us through the normal channels or via the Contact Us page.

Just a reminder that a meeting of High West Jesmond Residents’ Aassociation (HWJRA) takes place tomorrow evening, Tuesday 23 January 2017 at 19:00 in the Ouseburn Room at Trinity Church on Gosforth High Street – we hope to see you there.

There will be a meeting to update on the proposed changes to Blue House Roundabout and Jesmond Dene Road, and the proposed introduction of Communal Bins.

The meeting will hear from our Chairman, Nick Moore who has attended 6 meetings of the steering group for the development of Blue House Roundabout and Jesmond Dene Road junctions.

The steering group has not yet reached its final conclusion but this will be an opportunity for residents to be updated on work and to contribute thoughts about the proposals to date.

Also, following the recent news that the Council is proposing to introduce Communal Bins to our area we have invited our local Councillor Dominic Raymont to the meeting who will be able to share the latest news and listen to resident’s views on this issue.

We hope as many residents as possible will attend this meeting so that we can get a clear picture of the views of residents on both issues.
We look forward to seeing you at the meeting.

Congratulations to Nick Moore who was elected the new Chairman of High West Jesmond Residents’ Association (HWJRA) at the AGM last Wednesday.

I am filling the Secretarial and Treasurer roles and Jeffrey Fox is our newly appointed Communications Officer. I am also pleased to report that a further 4 committee members were elected on the night.

Membership is also strengthening following the various leaflet drops around the area.

Bob Curry is stepping down from the committee after many years as both Chairman and committee member and we thank him for his valued contribution.