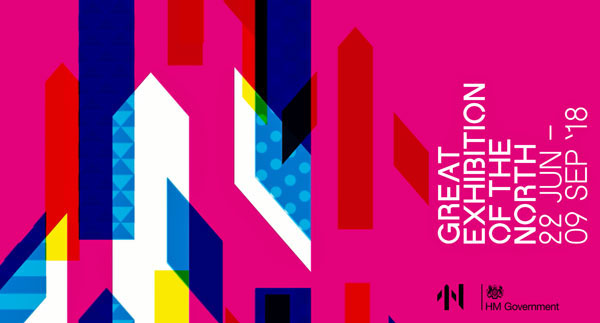 The start of the new year marks the official countdown to the biggest event in England in 2018 – Great Exhibition of the North (www.GetNorth2018.com).

Taking place in NewcastleGateshead from 22 June – 9 September 2018, details of the opening day celebrations have been revealed.

Visitors will have the chance to experience for the first time content exploring great northern art, design and innovation in the Great Exhibition Hubs and Trails. These venues and locations will remain open until dusk as audiences are drawn to the Quayside for a special evening event revealing major Great Exhibition of the North pieces.

The spectacular start to the 80-day Exhibition on 22 June will feature an 80m long water fountain in the River Tyne that will reach the height of the Tyne Bridge.

The dramatic display has been specially commissioned for the Great Exhibition of the North and showcases the collaboration between industry and art that runs through the entire programme.

Inspired by The Angel of the North, which celebrates its 20th anniversary in 2018, three newly commissioned music compositions will provide a soundtrack to the water fountain and each one will be premiered on the evening of 22 June.

An arrival film – a key piece of programming for anyone visiting the exhibition – will have its world premiere as part of the ‘Get North’ opening event where it will be projected at large scale at the Quayside.

Sir Gary Verity, Chair of the Great Exhibition of the North, said: “Our ‘Get North’ opening event will set the tone for what is going to be an outstanding summer of amazing exhibits, inspired technology, vibrant street performance, cutting edge culture and magical experiences.

“We’ve brought together innovative Northern technologies and world-class artists and performers to showcase the best art and culture, design and innovation from right across the North of England.

“Perfect for all the family, Great Exhibition of the North will be the event to experience in 2018.”

“Following the opening event, the water sculpture, arrival film and anthem for the North will be available to enjoy every day during the Exhibition.”

Set against the backdrop of NewcastleGateshead’s iconic quayside with its seven bridges spanning the River Tyne, the water fountain display will be seen for the first time as part of the opening event.

William Elliot, Technical Director at Water Sculptures said: “The River Tyne and quayside is such a focal point in NewcastleGateshead, the fountain will really bring it to life during the Great Exhibition.”

Another highlight of the ‘Get North’ opening event will be the first public performance of an anthem for the North – a new piece of poetry by award-winning writer and broadcaster Lemn Sissay.

Lemn Sissay said: “The Exhibition will shine a light on the difference the North is making to the world today and tomorrow. I am proud to be invited to create a new anthem for the North which will sit at the heart of the opening of the Exhibition. I am proud of the North. We name the unnamed, we count the invisible, we make change. We make a difference.”

The Great Exhibition of the North arrival film will be screened at the quayside as part of the celebrations. Telling the inspiring story of the North, the film will also be shown throughout the Exhibition at Hub venues Great North Museum, BALTIC Centre for Contemporary Art and Sage Gateshead.

After the the opening event, the water sculpture will run several times a day throughout Great Exhibition of the North with visitors able to download the new compositions from www.GetNorth2018.com and select their preferred musical accompaniment.

During its evening performances the fountain will also include a special LED lighting display, choreographed and synchronised to the commissioned music.

Carol Bell continued: “The word is out, NewcastleGateshead is the place to be in 2018. Fresh from being named the top place to visit in the world in 2018 by Rough Guide, we’re delighted to announce details of what will be a spectacular start to Great Exhibition of the North.”

The full 80-day Great Exhibition of the North programme will be unveiled in early 2018.