Publication of the planning proposals prompted a significant amount of discussion from local residents and other members of the High West Jesmond community plus other users of both the roads, footpaths, cycleways and green spaces.

Opposition to the proposals

The proposals were strongly opposed by High West Jesmond Residents’ Association (HWJRA), other local resident groups and other community stakholders.

The following extract from a HWJRA mailing at the time summarises the responses of the local community in summer 2016:

“The Council’s plans for moving the Blue House Roundabout 50 metres north and making it about ten times the size of the current roundabout have been met with almost unanimous disbelief and anger.

Motorists, cyclists, pedestrians, environmentalists, local residents and businesses – pretty much everybody – have expressed serious concerns over the plans to tear up nearly 5 acres of beautiful Town Moor land, cut down 100 mature trees and construct a “motorway-style” roundabout in the middle of Little Moor and Dukes Moor.

And for what purpose? The Council has not produced any traffic information to justify a proposal of this scale.

As well as being part of the Town Moor, the Little Moor has been a designated “public open space” serving Jesmond and Gosforth residents for more than 80 years. lt remains a popular and well used space in an area where access to such spaces is very limited. The road proposal will reduce the space by more than a third and the attractiveness of the space for recreational purposes will be severely curtailed.

Say no to cutting us off from Jesmond

lf these proposals go through then the only way to drive into Jesmond would be to go down to Forsyth Road (already identified by locals as a traffic black spot), or further on down to Clayton Road and all the associated school traffic. The only other route available would be to drive all the way down to the Central Motorway and come up Osborne Road from the South! The number 33 bus would also have to be re-routed under these plans.”

March for the Moor

As opposition from the local community mounted a March for the Moor was planned for Sunday 21 August 2016 to show the strength of oppostion to the proposals. (See Thousands protest over Town Moor roundabout plans ) 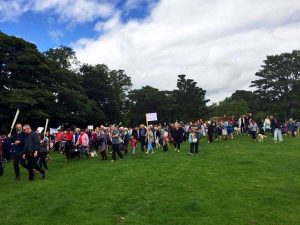 “We are delighted to see such a cross section of people come out and show support for this campaign.

“The council have no option but to scrap this plan, they need a complete rethink.”

The weekend march for the Town Moor received front page coverage in the Newcastle Journal on Monday 22 August 2016 (see image above and you can read the article on ChronicleLive) following the overwhelming show of opposition by the local community to the council road building plans for Blue House Roundabout and Jesmond Dene Road.

The BBC and the Newcastle Chronicle reported that about 2,000 people attended the March for the Moor protest and on Tuesday 23 August 2016 Newcastle City Council announced that its plans to build the motorway on the moor would be “redesigned”.

A short video was issued by Newcastle City Council cabinet member for Investment and Development Cllr Ged Bell where he explained that the council had pulled its controversial plans to build a large motorway style roundabout to replace the existing Blue House Roundabout in High West Jesmond.

High West Jesmond Residents’ Association welcomed the news that the council had withdrawn its original plans which were overwhelmingly opposed by High West Jesmond residents. HWJRA looked forward to continuing to enage with Newcastle City Council so that a more appropriate solution could be found.

As referred to by Cllr Ged Bell in the video Newcastle City Council announced on 23 August 2016 its intention to create a Blue House Roundabout working group.

You can read more on the Blue House Roundabout working group website at http://bluehousegroup.org/

HWJRA has continued to positively engage with Newcastle City Council and the Blue House Roundabout working group and we have attended the working group meetings to represent residents.

As meetings of the Blue House Roundabout working group have taken place we have posted news stories on this website.

You can read more on the News pages – use the Categories side bar and choose Blue House Roundabout.

The recommendations of the Blue House Working Group were published on 23 January 2018.

You can read the news release of the BHWG recommendations here.

You can read the news release from Newcastle City Council here.

You can read more about the coverage of the Blue House Roundabout proposals on our website and we include the following media links:

8 Aug 2016 – Newcastle Chronicle – Why are ribbons appearing on trees next to Newcastle’s Town Moor?