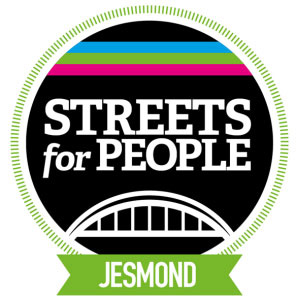 Proposals for changes to Moorfield and Ilford Road roads have been revealed by Newcastle City Council following the earlier public consultations under the Streets for People initiative.

A public drop in session is being arranged by Newcastle City Council for the public to see the Streets for People proposals on Tuesday 19 March 2019 3pm – 7pm at Jesmond Library, St George’s Terrace.

The Council’s Streets for People website January 2019 update says that the amended scheme drawings have been  “thoroughly costed so we have a much clearer idea of what is affordable and achievable within the available budget”.

“It was always our intention to propose a greater number of schemes than we had the budget for, thereby creating a sub set of ‘go to’ proposals in each area that could be brought forward in the event of other funding being identified.”

Newcastle City Council has discussed the options for each area with the Streets for People reference groups and fed this back to local Ward Councillors who have determined the following shortlisted schemes to progress to formal consultation and delivery.

The proposals in Jesmond are as follows:

You can read about proposals for other parts of Newcastle upon Tyne on the Streets for People website.

The principal objectives behind the changes are to reduce the speed of traffic on both roads and to improve pedestrian and cycling safety.

Many of you may remember that it was originally proposed to narrow Moorfield by adding a wide cycle lane along its full length.

Whilst there was widespread support for the objectives of reducing speed and increasing safety, the reaction of local residents to the significant narrowing of Moorfield was strongly negative.

High West Jesmond Residents Association were therefore pleased to learn that the Council has reacted to the feedback that they received and has produced a revised proposal that maintains the current width of Moorfield for most of its length.

The Council has advised that full details of the proposal are going to be made available shortly, and have organised a “drop-in session” at Jesmond Library on Tuesday 19 March from 3pm – 7.30pm so that local residents can take a look at the detail of the proposals and comment on them.

Our understanding is that the proposals will include:

We will make the plans available via our website and the notice board on Newlands Road as soon as they are available from the council. 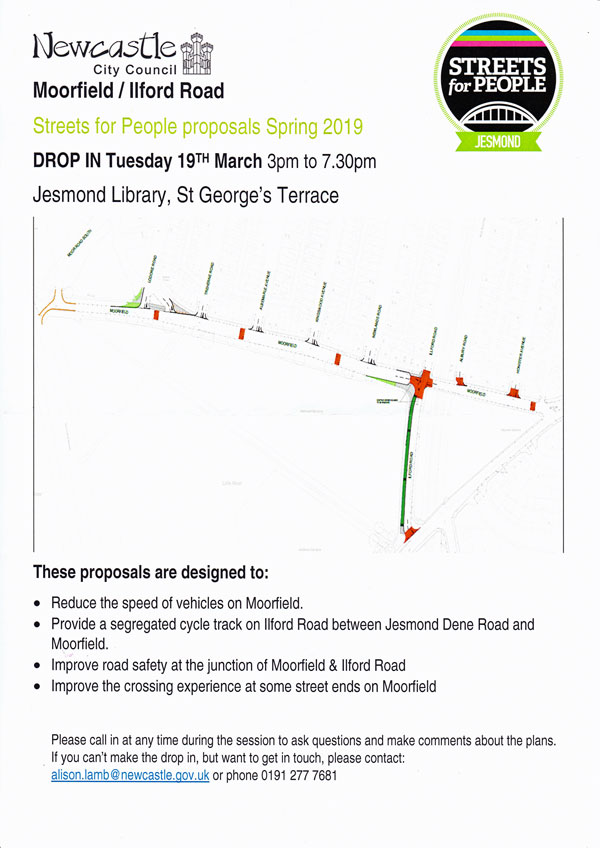 You can download a copy of the leaflet Newcastle City Council has issued for the drop in session on Tuesday 19 March 2019.

The Streets for People website also states that “We recognise that some people involved in this process may not agree with the shortlisted schemes, and appreciate they will have their own preferences. We also recognise that the delivery of the above schemes are subject to statutory consultation processes and it is clear that some will be significantly more controversial than others. We hope we can rely on your ongoing engagement with the process to get a range of improvements delivered.”

Newcastle City Council is advising motorists that Killingworth Road could re-open to traffic from May providing the weather conditions remain stable.

The council say current project timelines, barring severe weather events such as last year’s Beast from the East, could see the road partially open to traffic before summer.

Due to on-going construction works, initially only one-way (south bound) traffic and pedestrians could be accommodated in the available road space. Estimates show two-way traffic could use the road from July onwards.

Essential work by contractors is still taking place around the Metro bridge which has pushed back the early 2019 re-opening. Further construction work is required before the road can safely be re-opened to traffic and pedestrians.

Project manager, Jon Higgins from Newcastle City Council said: “We appreciate the inconvenience the extended closure on Killingworth Road has had on the travelling public and we would like to reassure motorists that we are working closely with contractors to open the road as soon as possible.

“Current estimates show that we could have one-way traffic using the road in May, but this is heavily based on no further complications such as severe weather conditions further hampering progress on site.

“We know this is disappointing for motorists and we appreciate their patience during the extended road closure, but safety is paramount before we can allow traffic and pedestrians back on Killingworth Road.”

The project was beset with difficulties during the gas pipes replacement programme with Northern Gas Networks which caused it to severely over-run.

Engineers have been reviewing the timeline to compensate for the delays but with multiple contractors involved and complex engineering work required the project has slipped back.

Contractors are currently finalising piling works to construct new retaining walls next to the Metro bridge. Once this is complete, construction teams can access the site under the bridge to do final road-widening works.

A phased opening is planned which will allow traffic and pedestrians with safe routes through the roadworks. As the scheme progresses, further road space will become available and two-way traffic will be introduced.

The council will continue the last stages of the works with installing widened footpaths, cycle lane, bus lane, vehicle lane and safer crossings.

Construction work will continue into early 2020.

Once complete, the project will improve air quality, reduce journey times and improve public transport reliability on one of the major commuter routes into the city.

The council wishes to gather the views of residents, businesses and stakeholders on how we manage waste in Newcastle. 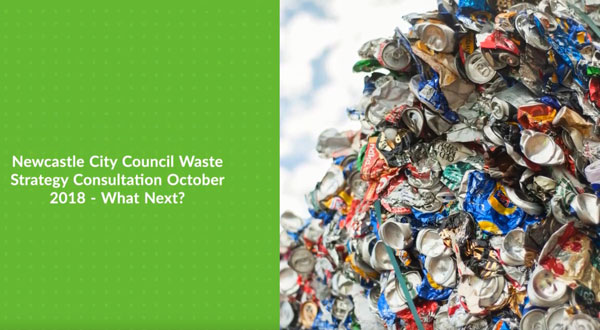 “Having asked for residents’ and businesses’ views on our proposed priorities for the Newcastle upon Tyne Waste Strategy in the first stage of our consultation, in this next stage we want to get people’s views about the specific actions we are thinking of taking to ensure that the Waste Strategy Action Plan will deliver the outcomes we want.

The Waste Strategy is being developed based on several key areas:

To help us ensure we meet our outcomes, we want your views on the actions we are thinking of taking to achieve our goals for each of these key areas. You can find out more about this here: Newcastle Waste Strategy Consultation Stage 2 Information 2018.

Please give us your views by taking part in our online survey, before 31 October 2018.”

Catherine McKinnell, MP for Newcastle upon Tyne North has written a letter to Northern Gas Networks about the ongoing closure of Killingworth Road and the disruption caused to local residents and businsses.

The letter was addressed to Mark Horsley, the Chief Executive Officer of Northern Gas Networks.

Northern Gas Networks is responsible for the delivery of gas to 2.7 million homes and businesses in the North East, Northern Cumbria and much of Yorkshire. 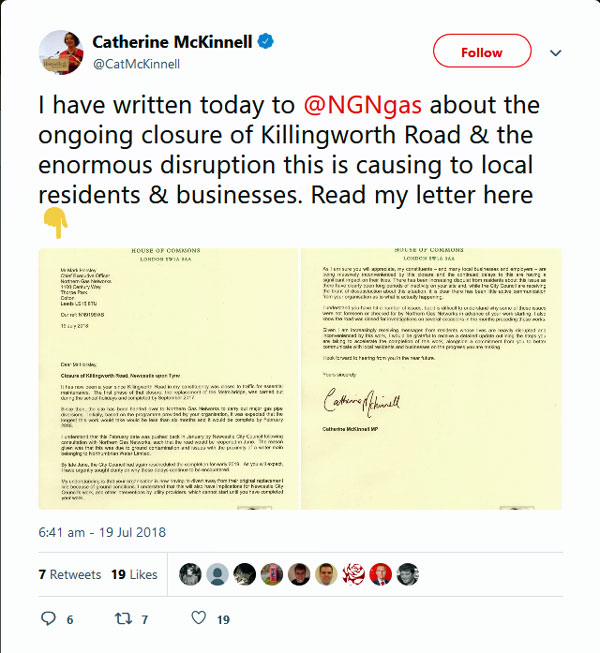 Residents can read the letter which was published on Catherine McKinnell’s Twitter page twitter.com/CatMcKinnell    @CatMcKinnell

A response was made on Twitter by Northern Gas Networks  @NGNgas where they said: “We’ve seen your letter and we’ll have a direct response to you very soon.”

The work on Killingworth Road was originally planend to be completed in February 2018 but there was then a delay until June 2018.

It was then announced that Killingworth Road (the A189), an important business and commuter route, would continued to be closed until 2019 due to ongoing delays with the work.

You can read the MP’s letter below. 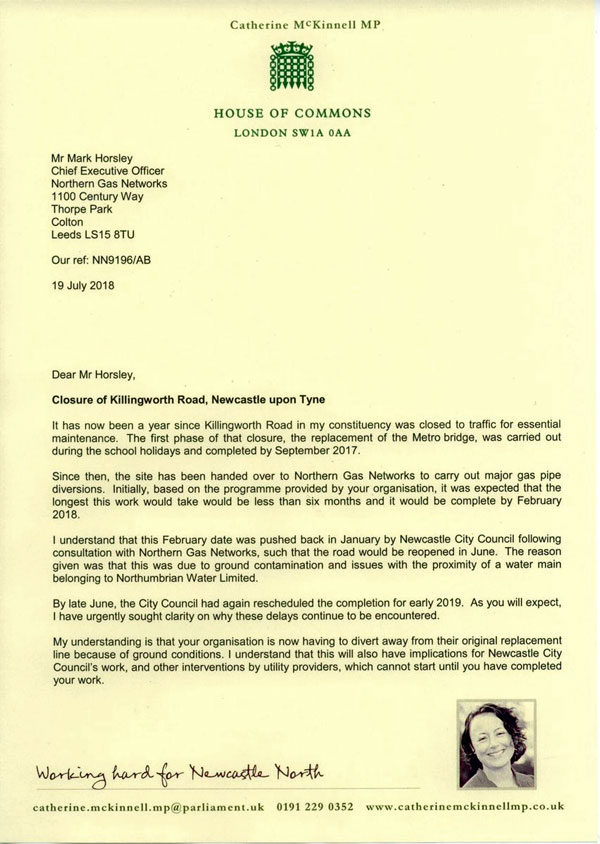 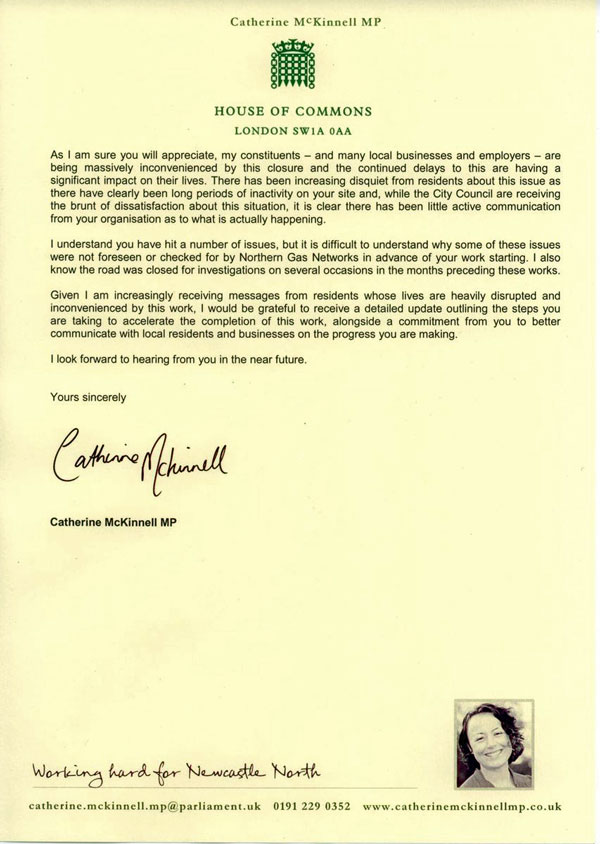 Residents are invited to attend a meeting with Dene & South Gosforth Ward councillors to help determine the priorities for the ward for the year ahead. 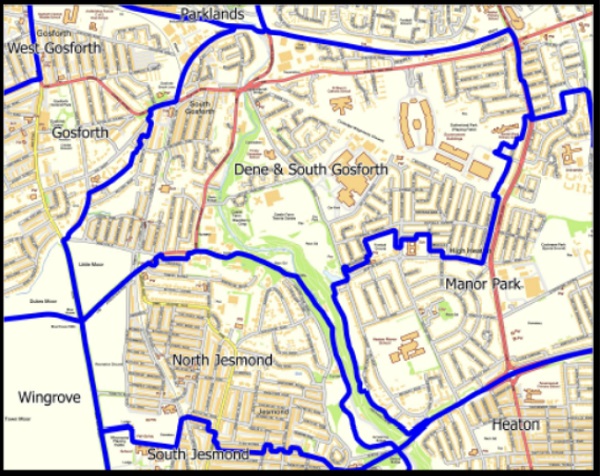 The meeting is scheduled to finish at 8.30pm.

According to the agenda for the meeting (available on the Dene & South Gosforth Ward Committee meetings page of Newcastle City Council’s website), the meeting will feature:

According to papers on Newcastle City Council’s website, Dene & South Gosforth ward has been allocated £3,565 to spend (amount is before decisions on grants currently under consideration).

The council has also set up a survey and invited residents to complete this – you can find this survey on the council-run Let’s talk Newcastle website on the Dene and South Gosforth Annual Ward Priorities Meeting page.

The following information has been issued by Newcastle City Council:

Watch the short YouTube video to find out more:

Each of the 26 Wards of the city will hold 1 annual targeted event to identify
ward priorities.

Annual events will be led by Ward Councillors in consultation with local
residents and stakeholders to share identified draft priorities and seek
validation and commitment for collaborative solutions with partners and the
community and voluntary sector.

Ward priorities will be agreed for the following 12 months and will inform
ward committee budget expenditure.

Annual events will focus on priorities for the ward and what we can do in
partnership, encouraging all stakeholders to be part of the response

Identified ward priorities will inform a work programme / action plan for the
ward and we will work directly with communities based on core themes of
active citizenship, building community capacity, behavioural change and
developing community partnerships.

Common themes will be considered where joint action plans can be
developed to avoid duplication and promote best practice.

A copy of this agenda is available on the Newcastle City Council website on the Dene & South Gosforth Ward Committee meetings page.

Further information can be obtained from the Communities Officer: 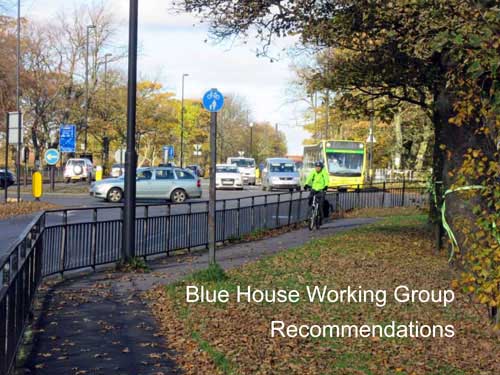